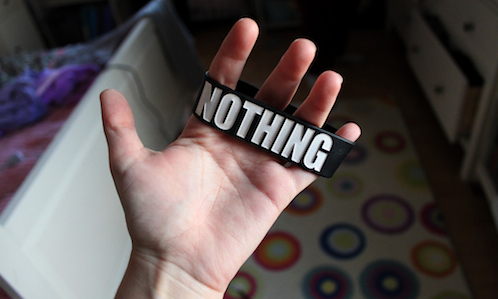 “Punishing a kid by taking everything away leaves you with nothing”

I posted this the other day on the BehaviorBandAid Facebook page and one comment raised an eyebrow:

“What’s a good alternative to threatening to take something away?”

I have also heard,

“I have nothing else to take away! What do I do now?”

I can tell you it happens quite a bit: parents feeling painted in the corner by their kids. No Nintendo because she did not get up on time, then no computer or television time because she did not do her homework, and finally no friends over because she had a big fat tantrum and kicked little brother. Your threats and “punishments” escalate, but nothing gets better.

At this point you are taking away stuff that does not even matter and talking about taking the Nintendo to Goodwill and giving all the toys to “children who really want them.” You are stretching to find a way to punish your kids, but it is not working (read here for more on that).

Admit it…you sound like Principal Vernon from The Breakfast Club (fast forward to 1:16 and one bad word so turn the volume down a little if the kids are near):

What is the answer?

Think of the things that are highly motivating to your child. For most families it has to do with screen time (computer, TV, Wii, DS, iPad, etc.), but for some others it might be having friends over in the afternoon or being able to ride their bike to the park.

Instead of taking these things away, control access to them and deliver them based on good behavior rather than removing them based on bad. The “punishment” becomes simply not having access to it when things do not go well.

But, you have to control access. Put the controllers in your sock drawer, lock up the bike, password protect the computer…

Make rules/procedures for ways to gain access to these things on a daily basis. Homework done by a certain time, room cleaned up, laundry done, getting ready for school on the next day, brushing teeth, etc. Think of the most important things for you and make sure you put those things ahead of access to the preferred items or activities.

This can also include the absence of the unwanted behaviors: no hitting, no tantrums, etc. Now, how about when your child really screws up and does something pretty ridiculous or harmful. Make access to those items or activities based on “earned days,” which is a number of days when they have done all they needed to do that would usually earn them access.

So for example, let’s say if to watch TV at night, he needs to complete his homework by 6 and have his room clean. If he has really screwed up, maybe he needs to do this 2 nights in a row. I would not suggest going further than that. This way, getting those preferred activities is based on behavior rather than some other arbitrary timeline.

Don’t put yourself in a position to be in a tug-of-war. You will lose…read here as to why

2 thoughts on “When punishment takes everything away…”

What do you think? Reply here Cancel reply