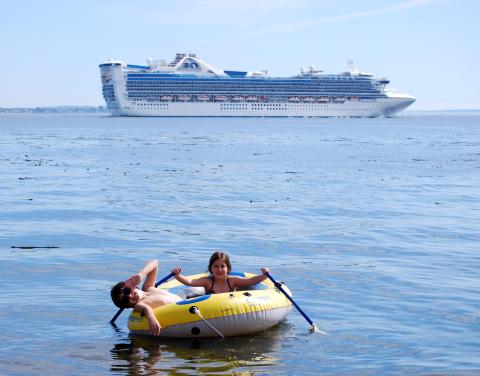 Recently, I read Turn This Ship Around by L. David Marquet, a former commander of a nuclear submarine who turned one of the poorest operating submarines in the fleet into one of the highest performing in a variety of different ways. Interestingly, he did so by enacting many procedures that were in direct conflict with the standard operating procedures of the military.

I think there are a lot of things parents can learn from his experiences.

One realization he had early on was,

“The reward [for good performance] was no punishment”

basically hoping the avoidance of punishment was enough to maintain optimal performance.

He found a variety of side effects of this strategy (with the obvious fact that it resulted in a very poor performing ship):

What does this have to do with parenting and teaching better behavior with children?

I think a lot of parents adopt a “behave or else” strategy–and it fails.

1. Think about your child’s behavior-is the reward avoidance of punishment?

If so, you need to turn your ship around. You may be in the nasty cycle of punishment and not able to get out of it. Think differently about this. Do not let good behavior go unnoticed just because “he should behave,” “she should sit quietly,” or “he should be nice to others.” (see my earlier post about what kids should do).

2. Specifically recognize the behaviors you want and tell your kid about it.

Tell them exactly what they did right when they do it. Be immediate. It costs you nothing. Pay attention. This is especially true if they do something well in a situation when they have previously struggled. For example, if your daughter consistently interrupts you while you are on the phone and, by some unimaginable reason, she is quiet one time when you take a call, let her know that it was awesome that she waited and was quiet! Do it in a positive way (“thanks for being so nice and quiet and letting me talk”). Don’t pass up the opportunity.

When the kids do something special or behave in a way you want them to, or have been exceptionally good, be impulsively positive by allowing extra time with the iPad, a chance to pick the movie or TV show, a popsicle on a hot summer day or pick a song for the ride to school. Anything. Just do it in the moment.

Please remember that good behavior is sometimes the hardest to notice…pay attention and you will not regret it.

[Also see an earlier post about a similar effect with child behavior with a video from a favorite movie of mine: Office Space.]

Sometimes one of the most important parenting decisions we can make when it comes to our child’s behavior is admitting when something we are doing simply is not working.

If your kid is giving you fits with a specific behavior and you just cannot seem to make it better…you may need to swallow your pride and head in a totally different (and often un-natural feeling) direction.

Here are 2 common errors when things are not working: END_OF_DOCUMENT_TOKEN_TO_BE_REPLACED

Because I’m a parent…that’s why. It is what parents do. BUT, does your child too often ask “why?” or otherwise try to get into back and forth discussions about things you have asked them to do? Maybe when you have said, “no?” Do you have an attorney in training? Do you feel like your 5 year old would be a pretty good hostage negotiator? Sometimes “because I asked you to” is the most honest and truest answer. END_OF_DOCUMENT_TOKEN_TO_BE_REPLACED

One of the most powerful behaviors you can teach your child is how to behave when told, “no.”

I was recently pleased to read an article about teaching children resiliency when things do not go their way. I have written about it regarding a parent who tried too hard to keep her children happy and when warning about the dangers of trying to avoid every tantrum or pooched out lip.

Here is the newsflash: your kids are not always going to get what they want! END_OF_DOCUMENT_TOKEN_TO_BE_REPLACED

When thinking about something you are doing to help stop a certain behavior or encourage another one, ask yourself a very simple question:

“are you doing more of that something, or less?”

The answer will tell you if your “plan” is working.

This might sting a little, so hold on with me…this is important. END_OF_DOCUMENT_TOKEN_TO_BE_REPLACED

It was my first year of graduate school and my first behavior analysis professor asked the class what seemed to be a fairly easy question regarding a student’s behavior. She said,

Johnny cannot sit still in his seat. He is always fidgeting, and moving around. What would you do?

Take a moment and think about what you might have said…

As I remember, the common responses were something like this:

“Reinforce him for sitting calmly in his seat”

“Give him stickers for sitting, and do it a lot at first”

“When he is wiggling in his seat, tell him how to sit nicely”

There might have even been a response of “just ignore it…”

The professor had a lesson to teach and it is a lesson I would like to share today.

She showed a picture of a seat filled with thumbtacks. END_OF_DOCUMENT_TOKEN_TO_BE_REPLACED

Recently, a  CDC report showed that 1 in 50 children between the ages of 6 and 17 are diagnosed with Autism. So, what should the numbers “1 in 50” mean to you? END_OF_DOCUMENT_TOKEN_TO_BE_REPLACED