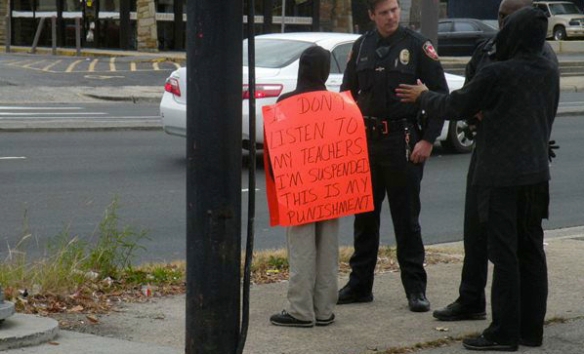 I recently read a news story about a boy who was forced by his mother, as some form of intended punishment, to stand on the roadside with a sign around his neck that read:

“I don’t listen to my teachers. I’m suspended. This is my punishment.”

In the story, the mother commented she had “reached her limit:”

“My 12-year-old son is constantly acting up, getting trouble, and I’m tired of it. This is my last resort. I’ve tried spankings, taking his privileges away, and nothing has worked,” she said.

There are so many things about this story that turn my stomach, but I also understand the reality that many parents also find themselves in this position. Maybe not to the extent they resort to public humiliation as a form of parenting, but to the extent they lose sleep over the fact their child’s behavior is not changing despite their best efforts.

This is when a change of perspective has to take place

Sometimes we focus much too much on what we want to stop without finding an appropriate replacement for that behavior. Face it, the behavior you want to eliminate serves a purpose. It is functional for your child. It results in attention, a “shock value” response, escape from something aversive, a delay away from something they do not want to do, accessing a desired object or activity…there are a few more, but these are the main reasons.

So, the question is,

What do you think your child gets out of a behavior you are trying to eliminate? Can you create a way he can get the same result with a more appropriate behavior?

Sounds weird, here is an example.

“I have to yell at my son every day to pick up his clothes…every time I ask him, he acts like I am not talking and walks away from me. When I approach him again, he freaks out, starts yelling to the point where I give up and usually end up grounding him.”

Behavior to be eliminated? Refusal, freak out yelling and noncompliance

Probable reason (purpose/function) of his refusal? Escape/delay from the task of picking up clothes? (in some cases not having to do it at all because the mom gets so tired of seeing dirty clothes she does it “just this one time”).

More appropriate “replacement” behavior? Actually doing some of the task or calmly asking if it can be done at some later time.

The ticket? Allowing escape from the task following getting started or listening the first time (or even offering a suggested time to do it later).

So you ask him to clean his clothes up and he goes in and gets started. Get your tail in there and do it with him or maybe even say,

“Hey, I’m glad you came in here when I asked and did not freak when I asked you. I will get the rest. Take off.”

This way, he gets escape from the work after doing what you wanted rather than simply walking away.

Your daughter actually turns off the TV when she is asked (when she usually freaks out and tries to delay turning it off). Guess what? Turn that TV on for another few minutes.

“You know what…do you want to watch a few more minutes? You turned it off when I asked, so go right ahead…I appreciate that.”

Why? Because turning it off when you asked is what you want, and is the reason she usually bickers with you is to keep it on. So, let her keep it on when she does what you want her to do.

The moral of the story: make sure when you say you have tried “everything” that it is not just the punishment strategies you have tried.

1 thought on “What to do when you have tried “everything””

What do you think? Reply here Cancel reply